OFFICIAL VIDEO FOR “LET YOU LOVE ME” HITS 2.3 MILLION VIEWS IN 3 DAYS

British pop sensation Rita Ora is confirmed to be returning to Sydney to perform at the 2018 ARIA Awards with Apple Music at The Star Event Centre, Sydney on Wednesday, 28th November 2018, broadcasted on the Nine Network and hosted by Keith Urban.

Dan Rosen, ARIA Chief Executive says,  “We are thrilled to be able to welcome Rita Ora to this year’s ARIA Awards as a special guest performer. She is an extremely talented artist and performer and one of the most exciting acts in the world right now.”

It has been a momentous year and a half for Rita Ora, most recently announcing the details of her second studio album "Phoenix", out on 23rd November. Following a sold-out European tour, her latest release “Let Me Love You” entered the UK Charts history books with the most Top 10 Singles for a British Female Artist. Her global hit “Your Song”, marking her triumphant return also reached 3x Platinum in Australia and was a Top 10 smash in the UK singles chart.

Following on from this, she collaborated with Avicii on their Top 10 global hit “Lonely Together.” Her single “Anywhere”, released last October, earnt a #2 spot in the UK and reached 2x Platinum sales in Australia. Further collaborations with Liam Payne for the Fifty Shades Freed Soundtrack “For You” became her 4th Top 10 hit, as well as her girl-power anthem “Girls”, which saw Rita team up with Cardi B, Bebe Rexha & Charli XCX to achieve yet another global success.

Rita Ora first rose to prominence in February 2012 when she featured on DJ Fresh’s single “Hot Right Now”, which reached #1 in the UK. She has now sold a staggering 7 million singles, had 12 Top Ten singles in the UK, and a #1 UK Platinum-selling debut album all under her belt, cementing herself as one of the most successful pop acts out of the UK in the last decade. Her return to music last year culminated in 1 billion streams and views worldwide, and four globe-spanning hit singles. 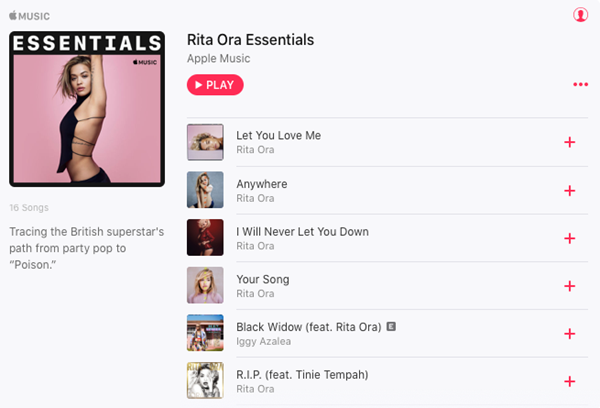